Smeyer wrote a spy thriller! Who knew? Not me. 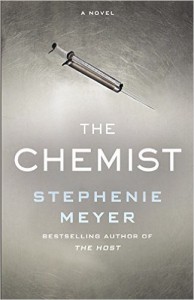 Recently, a friend brought to my attention an article about Chris Paolini’s upcoming foray into science fiction space opera — which is code-named “TSiaSoS” ( or “The Something in a Something of Something”) — so that we could be assholes about it. I’ve said this before, but: I actively enjoyed Eragon as a sort of gleeful homage slash Frankenstein’s monster of formative fantasy literature. There’s lots of Tolkien, some Dragonflight by McCaffrey, even some elements of Star Wars (which is totally science fantasy; don’t @ me.) But the later books in the series just get worse and worse as he begins to believe his own hype. I couldn’t even make it to book four because three was such an interminable Mordorian slog. Anyway, one of my friends pointed out that it’s been nine long years since Paolini last published a novel — though there was a collection of short fiction — and that historically writers known for one thing trying to cross over into another genre after a long publishing lacuna tend to fare poorly. “Remember Stephenie Meyer’s spy thriller?” He asked.

I was like, record scratch what the fuck, no I hadn’t.

Turns out, in 2016, Meyer published a novel called The Chemist. It had been eight years since both The Host and Breaking Dawn were published. I can only speculate about how well The Chemist did: The article about a screen adaption says it sold 1 million copies, which is a whole fucktonne of books. But the article also mentions that the Twilight Saga sold 100 million copies, which is literally two orders of magnitude more (pop pop!). The Host, published concurrent with Breaking Dawn, which includes an alien parasite love triangle (square, really) sold something like 6.5 million copies. So The Chemist is no kind of dismal failure, but it also hasn’t enjoyed anything like the sales of either Twilight or Twilight‘s not as successful followup. And it’s being worked for a screen adaption.

Long story short: I had to read it.

Juliana/Alex used to work for an evil government agency which is so evil it doesn’t even have a name, but which is CIA-adjacent. She worked as a torturer, wringing confessions and information out of people using pharmaceuticals: inject something to cause agonizing pain, and then question them after the effects wear off. Something like three years before the start of the novel, the department decided to liquidate Alex and her mentor, and she’s been on the run ever since. The department catches up with her; they say they want her to come in from the cold; due to a series of bad choices she ends up kidnapping and torturing a DC school teacher. Mid-torture session, his twin brother literally parachutes in with his attack dog. After a squabble which gives Alex the upper hand, she and the twin brother come to the realization that they have been set up to kill each other, because they are both loose ends.

On a sentence level, Meyer has decidedly improved as a writer. There isn’t the same embarrassment of adverbs or awkward phrasings. Her writing has smoothed into the kind of prose that you don’t notice while you’re reading, which I think is appropriate for this sort of hacky popular fiction. (I know I’m treading dangerously close to the aphorism “If you like this sort of thing, then this will be the sort of thing you like”, but I don’t mean this observation about prose style to be some sort of snide aside. One thing I appreciate about Meyer is that she seems earnestly dedicated to the craft.) Meyer has always been better at detailing the interpersonal than she has been at action sequences, and that still holds in The Chemist. As a spy thriller, which lives and dies by its action sequences, this is something of a problem. The only action sequence I thought worked was the one with the dogs at the ranch house, and then only in places. Otherwise, the pacing is almost always off, as Meyer lingers on details that aren’t important, while hand-waving things that, on a tactile, physical level make no sense.

For example: While Alex is busy torturing the schoolteacher, she hears a plane buzz overhead and then crash in the distance. This is after a truly interminable sequence wherein she roofies and then abducts said schoolteacher from DC out into, like, the Pennsylvania wilderness or somesuch. I can’t stress enough how long the abduction sequence was, even though it was probably only pages. When evil twin brother appears, he has a preternaturally trained attack dog with him. He explains that he had to bail out of the plane and let it crash because there was no nearby landing strip, and he needed to get to his bro toot sweet. So, real talk, how did the dog get out of the plane with him? Did the dog have a dog parachute, with a ripcord it pulled like one of the Golden Plump chickens in those weird commercials in the 80s? Or did he have a Dog Bjorn so that a 80 lb German shepherd was somehow affixed to his body? How much weight can the average parachute handle? Given that evil twin is an absolute unit of a guy, over 6 feet tall, add a bigass dog, just, is this even physically possible? Even the most plausible answers are silly as hell. This is bad writing.

But I really want to go back and examine Alex’s background as a torturer. She does a tiny little bit of hand-wringing about her torture talents when she discovers that she’s tortured an innocent man. Like, that has never happened before zomg? Heretofore, all of the subjects she’s tortured (for a shadowy government agency that has spent three years trying to murder her after successfully liquidating her mentor while at work) have been absolute, easily discernible bad guys. (Sure, Jan.) Moreover, she has a 100% success rate in getting them to divulge meaningful intel through her pharmaceutical torture. She regularly leans in to the fact that her torture methods — which are pharmacological — do not leave marks, which is so much more civilized that lopping off toes or whatever. Apparently it doesn’t count as torture if you don’t leave marks.

Subjecting detained people to pain is immoral, whether you leave marks or not. It is evil to torture people. Torture violates both domestic law and the Geneva Convention. Waterboarding doesn’t leave a mark. The mob knew ages ago how not to leave bruises — a phone book or a bag or oranges will do the trick. And it’s been absolutely fastidiously documented that torture doesn’t result in meaningful intelligence: people will literally say anything to make the pain stop. That Alex uses chemicals to perpetrate pain on her subjects does not absolve her of this evil. I feel like I do when I encounter anti-vaxxers: not only do vaccines not cause autism, but even if they did, there is nothing fucking wrong with autistic people; stop acting like autism is worse than death. Torture will not give you meaningful intel, but even if it did, it’s still a grave and mortal sin; stop acting like torture can be excused.

It’s completely wild to read a book with a main character who engages in actual, legit war crimes, doesn’t feel bad about this, and is treated like a sympathetic character. She even has a stilted, embarrassing romance with the innocent man she tortured, because why the fuck not? He begins excusing her treatment of him while still tied naked to a steel slab, mid-rescue by his brother. She didn’t mean to torture me lol, it was just an honest mistake! What a meet-cute! Just, blah, I don’t even know how to deal with this.

So. I’m here at the wrapping up stage of this here book report, and I’m not sure where to go with this. I’ve often felt fondly toward Stephenie Meyer because I can appreciate the way she writes from her hind-brain in the Twilight Saga: Yes, of course, all of that imprinting business is bananas and the religious overlay completely twisted, but it felt honestly, individually fucked up in a way that occasionally resonated. I’ve said this before, but the birthing sequence in Breaking Dawn is the most horrifically bonkers thing I’ve read about childbirth, and I have a stunned admiration for what it must have taken to put that to paper. Sweet Jesus, woman, yikes.

Meyer, in The Chemist, is writing in a genre she has real affection for, but it doesn’t tap her subcutaneous instincts, which are, for better or for worse, her greatest strengths as a writer. The Chemist doesn’t feel like a hind-brain fiction; it feels calculated and planned. It is ultimately a bloodless iteration of bloody events. Meyer even lampshades this in the beginning, when Alex goes to the library to check out slash steal pop fiction spy thriller books. Yes, it’s all fictional, the torturer heroine thinks, but maybe there’s something clever I can learn. This is clumsy metafiction: hey I’m writing a book that acknowledges the books used as antecedent. But ultimately Meyer doesn’t have any skin in the game — not like she did in the Twilight Saga anyway — and it shows. She may have improved her prose, but she hasn’t improved her writing.