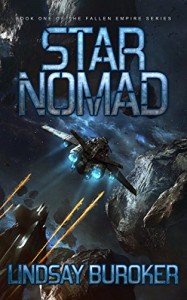 Lots of shitty sff tropes hitched to the specific kind of ugly sexual politics one finds in romance novels overwhelm what should (and occassionally is) a quipping romp through the universe. Rape threats and straight up sexual assault continue regularly from the first scenes to,the end of the novel. Before I get the "but that's realistic" chorus, I would like us to all take a minute and consider that this is clearly supposed to be a comic space fantasy with romantic elements, and the introduction of "rape as realism" is unnecessary, thematically jarring, and fucking stupid. And that's not even getting into a 45 minute diatribe about the very equation of rape with realism.

Which is disappointing because there are some nice comic moments and a gift for the absurd in Star Nomad, hidden in under bad world building and rape threats. Sure, a lot of it was derivative -- Firefly has its fingerprints everywhere, from setup to character types -- but I'm not looking to some romp through a pirate-infested asteroid belt to blow my mind or anything. (Unless it's Yoon Ha Lee's Ninefox Gambit, and that shit was amazing.) The Paradox series by Rachel Bach, starting with Fortune's Pawn, contains many of the same elements found here, but is much more expertly done. Start there for your lighter space opera.