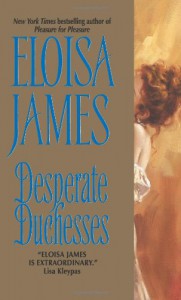 I've been intermittently reading James's novels as the mood strikes me for historicals, and it always seems to go thusly: one novel that's cute and light, followed by one (or even two) that are too douchey or dumb. I first hit James because she's the daughter of Robert Bly, a local poet of some note. I pretty much live to hate read Bly's stuff, which I have the occasion to do because my dad thinks he's awesome. So there's this tangled web of fathers and daughters and reading and whatnot.

Though James is a romance novelist, she's also a Shakespeare scholar and Robert and Carol Bly's kid. (I like Carol better than Robert as a writer; Carol's essays are aces.) So sometimes James writes a nice little ditty, and sometimes she goes too far up her own thing referencing Elizabethan poets. I adore Donne, but seriously, there's a limit. It just feels douchey at a point in Georgian romantic smut. And it's not as if I oppose some literary gilding in ur romance fiction, but just that it was excessive here. For sure the main character's dad DID NOT write the Christopher Smart poem to His Cat Joeffry, which is a great poem, and the misattribution annoys me some, even though it's fully acknowledged in a preface.

This was not bad, just .. odd as a romance novel. It took me ages to sort the primary couple, which can be fine, like in Talisman Ring, but here just felt diffuse. Maybe it's the Georgian setting, which is historically less, ahem, straightlaced than either the Recency or the Victorian periods, but the open fuckery sometimes felt forced. Even set now, where fuckery is not entirely unexpected, I find the easy acceptance of marital affairs, especially by women, not precisely believable. Women have always been under the thumb.

Anyway, this was fine, but clearly the start of a series, so it feels like set dressing more than playing. I'm sure I read a later book in this series at one point, and while are nods to all kinds of shit that happened in previous books, which I find irritating, the book itself was well richer for the personalities laid down earlier. Alas, early and later have their issues.