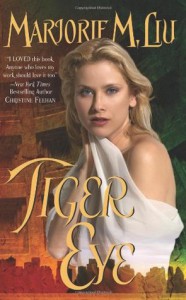 I got super sick last week and read a half dozen trashy and less trashy PNR/UF books to salve my soul. Also, I managed to tear through all of the Mercy Thompson books, so I'm a little at loose ends as far as light reading goes. I hit a lot of different series to try them out, and next up is Marjorie M. Liu.

I'm pretty sure Tiger Eye is Liu's first novel (or close to it) and it suffers from the usual panoply of first novel woes: weird pacing, a tendency toward repetition, and an absolutely energetic mess of a mythology. Main girl picks up a puzzle box in a Beijing market, and out pops a thousand year old shapeshifter. (The Chinese setting is actually really well done, which is a plus in a genre which is often tragically white.)

He's not a djinn, more's the pity, but just a tiger-dude stuck in a box by an evil wizard. He expects her to use him like his other masters, for sex or warfare, but she's like, ick, that's gross, I'm a modern person who doesn't particularly enjoy slavery, magical or otherwise. They fall in love. Also, some people try to kill her, and they end up in LA. Oh, and she's got magical powers and belongs to a company of mercenaries who have magical powers, like you do. The usual.

Two things set this apart. First, Liu's prose is almost overheated, very tactile and prone to lovely flights of acute observation. It made me realize how rarely one sees actual Gothic style prose in these sorts of novels, and how bizarre that is. PNR owes a lot to the Gothic novel, and the sentimental novel, but mostly the prose is grimly pedestrian. You have all these oversized emotions described with all the paste of a cereal box. (I'm looking at you, Stephenie Meyer.) It was charming to see someone punch it up a bit.

Second, well, this is going to be a little weird, but I think the heroine gave the shapeshifter guy a blow job while he was in his tiger form. The situation is a little vague, but he turns into a tiger, she's all into stroking his fur, then there's a blowjob, after which the text says something like, he changed back into a man and then they had sex. I know! Another thing I've noticed when reading PNR involving shapeshifters is that the authors never NEVER describe sex between the animal forms, or between one human and one animal. Which makes total sense and I'm not really complaining, thanks, just observing. So when someone crosses that line, I'm all astonishment.

I told this to my husband, and he was like, yeah, can you imagine a wereduck coming at you with his curly wereduck penis? You should never be a wereduck. After long conversation about the various animal penises out there, we tried to figure if tiger-man in his tiger form had a tiger dick or a person one, after which I started laughing so much I had coughing jag and almost died. PNR is not for the weak! I'm not sure I have a point, but my husband did say something that made me think a bit. He was like, if it's a furry fantasy, why isn't there more yiffing? And I was like, shapeshifter romance generally isn't a furry fantasy; that's a whole other ball of wax.

Shapeshifter tropes seem bundled more with biological determinism and domination/submission play, with a sideline in mate-for-life. Often these shifters are massive alpha types, hewing to a vision of pack hierarchies that are both Victorian as fuck, and heavily discredited, scientifically speaking. So you have a dude who is often described as dangerously domineering, but with this biological safety valve that makes him literally incapable of being abusive. After helping a second friend this year make a midnight dash out of her house after her partner had put his hands on her, I can see the appeal of a fantasy dude who can get his alpha on without fucking punching you and breaking your cheekbone.

So that escalated quickly!

Anyway, I liked Tiger Eye, tiger blow jobs and all, and given the strength of her prose (if not her worldbuilding) I'd try her stuff out again.

But honestly mostly because of the tiger blow job.