to use the parlance of our times... 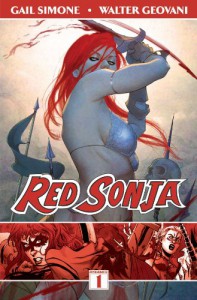 A lot of these quasi-feminist icons are, as they say, problematic. Wonder Woman solidly formed my childhood notions of the expanse and limits of female empowerment: you can save the day, absolutely, but you're going to need a patsy/beard to pin all the credit on. She was also the bondage fantasy of the dude who invented the lie detector.

Likewise, there's a lot of fuckery in Howard's Hyborian books, way moreso than in Wonder Woman. That WW's creator was into bondage and polyamory feels quaint and sweet compared to Howard's literally barbaric escapades, with sexual violence lurking around every corner. I'm not sure that anything Howard wrote is reclaimable, because his stuff (like Kipling) is just too damned entrenched in the mores of the day.

Ms Sonja stands out in such a place, revenge playing her way through grubsome slavers and bandits. You go girl! Etc. But she stands out precisely because every other woman is backdrop or victim, and I don't have a lot of time for fictions that posit a single woman in the "strong female character" role, not including villains, who are just domme fantasies anyway.

So, point being, taking on such a creature as Red Sonja is going to be no easy feat. I see her appeal, which hits me in much the same place as, say, Slave Leia does: good lord that's hot, but also, ish. In fact, I think probably the hotness is a function of the recoil, a sort of attraction/repulsion. You've got to put in enough transgression to get the blood running, but not so much you get all grossed out and overwhelmed.

I was excited about Gail Simone taking this on, because I like her stuff. But, alas, this just felt a little wan. The narrative slips around through Sonja's life, a retrospective of How We Got Here. There's a fair amount of killing and revenge killing. Some of it treads real lightly into crazy lesbian tropes, which didn't so much make me mad as bore me: if you're going to go there, then by god go there. I feel like so much that makes a character like Sonja compelling/infuriating was just skipped over, and we end up with this stock badass.

Which is fine. I like stock badasses; we could use more of them. First volumes are often kinda wobbly, and maybe this character will tighten up as the writers learn to write for her. So a success of a sort, considering how difficult it is the thread the needle of this kind of character.