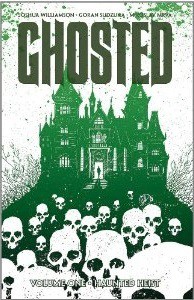 Setting the right tone in a horror/comedy is damnably difficult. You can unintentionally hit comedy when you're trying to be scary, but usually not the other way around. Too light, and it might be funny, but then the weight of true horror drifts away and the work just doesn't register; a diversion. Ghosted, I think, tries a little too hard for gravitas in a situation almost completely cribbed from Scooby Doo, which I think undercuts the horror. Simply put, I'm not buying it.

Danny Ocean-like person is broken out of prison by a strange old dude. Danny' last heist (one of a casino) went terribly wrong in an occult manner, and Danny is all haunted.  Strange old dude wants Danny to steal a ghost from some horrifically haunted manner (which looks like the Bates motel and the Muensters house had a baby.) He also wants Danny to take along his right hand lady, a blonde ice queen with guns.

Danny hires a crew, then they head off the the manse. It takes just moments for everyone to split up and start finding the rooms with the little eyeball-holes through the portraits and portals to the eldrich terror and whatnot. And moments after that for the buckets of blood to be splashed around. Honest to god, it really was like a Scooby Doo episode, but like, redder.

Danny is supposedly profoundly marked by seeing his busty girlfriend die gruesomely and supernaturally, but I just don't buy it. Mixed up with the smooth criminal, the whole haunted angle seems frivolous, or like a con. He began to speechify more and more as the horror got on with itself, and I kept expecting him to finish with, lolsyke, I was just distracting you so I could do this! And then pull a lever and something cool would happen.

It is entirely possible that this was all intentional, this unfortunate mix of the silly and the bloody, but I'm pretty sure not. The next episode gets even sillier, full up with Mayan jaguar gods, vengeful Indian casino grannies, et&c, and the comic delves more and more into why Danny is so busted up, poor lamb.

Square jawed heroes with tragic pasts predicated on the murder or violation of their girlfriends should just lose my number. It's not that I don't feel bad for these fair chickadees -- pain is pain, after all -- it just bugs me how everyone else's pain is just that much less real. The first dude to die in the mansion watches his brother get it in an extremely bloody manner, and no one bothers to worry about him. And this is even assuming you can make some bright red line from the source of pain to its bone deep sensation, which you can't. Alas.