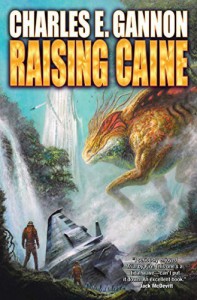 Even though Gannon's writing style is 130% not to my taste, I keep reading these books because they keep getting nominated for Nebulas. (I have a gig writing for B&N, and I ♡ handicapping the Nebulas.) So, here I am, following Caine Riordan as he falls upwards through the universe. Again.

When I was a wee lamb, I was super into Frank Herbert. I think a lot of nerds have this experience: flipping out about one writer and then getting all weird completist. It happens when you first start reading grownup books, but it's not exactly a grownup affection. That happens later when you read Ursula K. Le Guin.

Now I think stuff like Dune holds up, even the next two, but then the later three are only readable because of the nostalgia factor. Hell, even at the time, I read The Dosadi Experiment, and was so jazzed that I tracked down the previous book, Whipping Star. I knew that was garbage. I'm pretty sure Dosadi isn't garbage, but I suspect it's so shot through with...what. Shot through with ticks of that era that make my teeth itch.

For example, the protagonist's name in Dosadi is Jorj X. McKie. Just, what the fuck. That sort of ethnicity salad slash dumb spelling thing is a hallmark of a certain kind of science fiction, just as identifiable as romance novel names of the same vintage, and occasionally overlapping. Caine Riordan hits both for me, as do the voluminous other named characters in this novel.

It's not that the names alone put me off, just that they typify for me a certain kind of writing that I certainly enjoyed at one point, but now feels juvenile. The writing isn't necessarily juvenile, but it sure as shit conjures my juvenile self.

I appreciate how attentive this novel is to detail when it comes to constructing alien physiology, but then I also don't give a shit. If it's not a metaphor for something, what's the point? Gannon is clearly having a ball putting his square-jawed hero through the paces, and building up alien evopsych like Legos, but it just feels like, I dunno, getting roped into playing Magic: the Gathering with my teenager. I can see how it's a good time, but it also actual sucks.