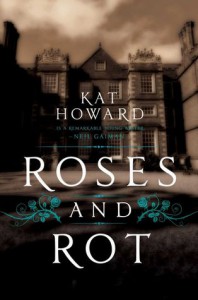 I've had this experience recently where I feel like my enjoyment of something is lessened by my familiarity with the genre. Meaning, if I didn't put it so stuffily, that the more I know, the less I enjoy. Roses and Rot fell into this a little for me, as I feel I have too much familiarity with the genre mix: college novels, the fairy tale that is twisted into modern idiom, a kind of earnest Modernism that one finds in Gaiman, etc. (Gaiman blurbed as well, so there you go.) But it's a good novel, one that I enjoyed reading, even if it felt a little well-trod.

Two sisters -- a writer and a dancer -- apply for a year long internship in the arts at the prestigious Melete. They both get in, making them rivals of a sort. They have a nightmare of a mother, who coddled the dancer while abusing the writer (who is the narrator), and they haven't exactly dealt with all the fallout from that, both inter-personally, and in their art.

Melete is fairy tale dreamy, with a river called the Mourning and lush greens and forest. But then it turns out it's another kind of fairy tale, and that's closer to nightmare. Melete functions by giving the Fae a tithe every 7 years, an artist whom they hold hostage for their emotions. At the end of the 7 years, they will have any success they want.Once the girls find out about this, the sibling rivalry is made even more complicated.

I found it odd that their mother's exact deal was never fully realized, which made her feel like a remote evil, There is no father to speak of, no depth to their interactions with her: she is purely evil, without any real motivations or redeeming action. While the sisters had a realness to their interactions, I found it hard to feel much about interactions with their mom. As she is the source of some of the rivalry, this crippled some of their own motivations.

There's a lot of Tam Lin in the DNA of this novel, but not as much of some of the sisterly märchen. (And Pamela Dean's Tam Lin, which had much the same plot, spoke to me more.) But complaints aside, when Howard let go a little and just walked around in this beautiful, dangerous world she created, I really felt something. Her language is lovely, especially if you like the metaphorically layered and maybe a little overblown (which I do.) It certainly made me think about my own sister, and our recent talks about our shared childhood.