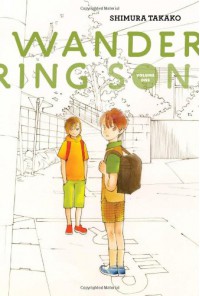 I asked for comic recommendations for my almost 9 year old daughter, which I am now reading through. This is one of those.

So, this one forced me finally to sit my ass down and figure how to read a manga. When I was a kid, lo, those many years ago, I'd heard tell of manga, and my very coolest guy friends read it, but it wasn't readily accessible to a white girl in Minneapolis. Not cheaply, anyhow. I think with all the Japanese gaming platforms and stuff like Pokémon, manga is way more accessible now (and has been for 20 years, sigh). So I should probably catch up.

It is way counterintuitive at first, reading right to left, but you catch on fast. And with this particular story, the sort.of dislocation caused by reading backwards worked well with the text. Wandering Son is about two 5th graders, a boy and a girl, who are transgendered, each longing to have the gender of the other. The events of Wandering Son are prosaic, just the usual problems of 5th graders -- friends, teachers, little sisters, parents -- but with this fearful edge of discovery. There's even a play within a play, complete with crossdressing.

The art is, well, maybe not the best. It's serviceable for the most part -- real flat, no color -- but I had trouble differenciating characters other that the principles. I also spent a fair amount of time puzzling through Japanese honorifics, which is an important part of the kids' interactions. The translator wrote a very good essay about honorifics. He generally thinks they should never be translated, because the average plot doesn't hinge on a specifically Japanese sense of social placement and gender, at least in ways that will be meaningful to the average Westerner. Here, it is vital stuff, worth puzzling through, worth translating.

I thought to myself, dang, this is pretty heady stuff for kiddie comics. Turns out shojo manga, which this is, has genderbending plots quite commonly. (Shojo manga are roughly manga written for schoolgirls -- ostensibly, but we all know who's likely eavesdropping). This sparked a memory for me of my cool friends reading Ranma 1/2 back in the day, about a boy who turns into a girl when splashed with cold water, and his attempts to rid himself of this curse.

So, ok, no points for originality. But I did enjoy how Wandering Son really did seem to be written for children, not written sidelong for more prurient interests. This is about transgender children, and the long, hard process of coming out and finding allies. Not, har har, I get stuck as a girl icky cooties. My 12 year old son thought it was sweet, his words, and has moved on to later volumes. I'm not sure I'm going to continue, precisely because it is so age appropriate: that awkward world of an awkward age. Good job.